A member of L’École de Nice, born in Troyes to parents of Spanish descent, Patrick Moya was educated at the Villa Arson in Nice before posing as a nude model for ten years with the hope of becoming the creature instead of the creator. He began working on the letters of his name ‘MOYA’ saying that “art is a signature” during his ‘neoLettrist’ period before inventing his alter ego, little ‘MOYA’: a caricatured self-portrait created for him to ‘exist in his artwork’. Moya also became a digital artist in the mid-80s: now he is the owner of the virtual 3D MOYA LAND on the web, where he can finally ‘become a creature,’ living in his work under the name of his avatar ‘MOYA JANUS’ (translated: MOYA GENIUS) who receives visitors by immersing them in his world. The summer of 2011, at the time of the publication of his ‘catalogue raisonné,’ Moya’s the ‘MOYA UNIVERSE’ (40 years of creation, 4200 artworks) arrived to maturity, as demonstrated by the impressive mural-installation of a 90-meter long fresco that told the story of the ‘MOYA CIVILIZATION’ on the walls of the art center La Malmaison in Cannes. Today the exhibition ‘MOYA IN THE CLASSICS’ continues his adventure. “To be an artist from Nice, in France, is to be a man from the South making Mediterranean art, where the artist is without guilt, where human beings exist and cannot be erased.” (Patrick Moya) 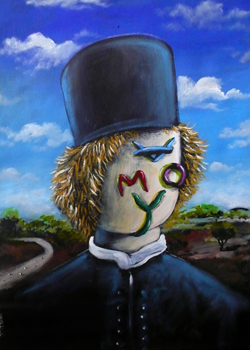