L’École de Nice and Fluxus artist Ben Vautier was born in Switzerland to his Irish-Occitan mother and French-Swiss Father. Close to Yves Klein and seduced by the Nouveau Réalisme, he was convinced that “art must be new and create a shock”. In the early 1960’s many artists attempted to capture the world as a work of art. Ben would have signed anything such as holes, mysterious boxes, kicking, God, chickens, etc. connecting art and life, explaining that everything is art and everything is possible in art. In 1965 he created a 3x3m gallery in the mezzanine of his boutique in Nice: ‘Ben doubts everything.’ There he exhibited Biga, Alocco, Venet, Maccaferri, Serge III, Sarkis, Fillou, etc. His boutique had also become a meeting place for many such as those who would later become key members of L’École de Nice (César, Arman, Raysse, etc.) Ben’s works are present in the largest private and public collections worldwide, including the MoMA in New York City, the National Museum of Modern Art of Paris, and the Museum of Modern and Contemporary Art in Nice. 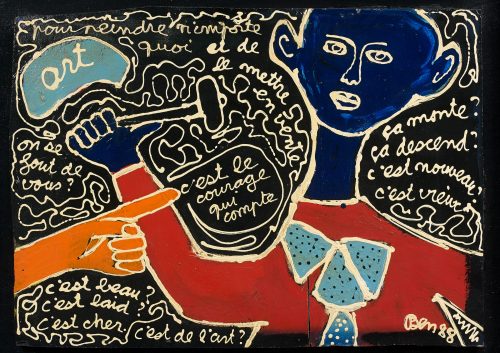