In 1961 Sosno started the magazine SUD-COMMUNICATION and published the first theory of L’École de Nice. This marked the beginning of his friendship with Martial Raysse, and later the sculptor would join L’École de Nice. In 1958 he began his studies in Paris in political science and at L’École des Langues Orientales, while also intermittently taking classes at the Law Faculty and the Institute of Filmography at la Sorbonne. Between 1963 and 1969 he had worked as an author, a journalist and a war reporter in Ireland, Bangladesh and Biafra. His concept of obliteration “hiding to better see” started in his photographs and then developed in his sculptures and architecture. Starting in the late 80s, he developed many projects linking sculpture to architecture. In 2001 Sosno was honoured with the distinction of Chevalier of the Order des Arts et Lettres in France and in 2005 Commandeur of the Mérite Culturel of Monaco. The inauguration of the Tête Carrée measuring 26 meters was held in 2002 in the presence of the Minister of Culture. It was the first monumental sculpture in the world and the first construction fully in aluminum. Sosno was born in Marseille and died in Nice at the age of 76. 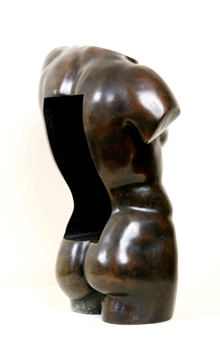